22 Sep The 67 Best, Most Popular, and Most Liked Hashtags on Twitter

Recently, we analyzed millions of tweets and found that some Twitter hashtags correlate with a 1,065% increase in engagement — clearly, hashtags still matter in 2019.

We saw similar increases with other popular hashtags, like #medicaid, #ethereum, and #crowdfunding.

There are two possible explanations for this:

To help increase engagement with potential customers on Twitter, we’ve compiled a list of the best hashtags to increase likes, retweets, and replies. Our list is by no means all-encompassing — we only covered a specific time period, and as trends change, so will popular hashtags. But the list should still provide longterm insights into general popular topics on Twitter, helping you create a more relevant content strategy.

We used a dataset of tweets ranging from January 2017 to May 2018. Hashtags were only included if they occurred in a minimum of 300 tweets, by at least 100 unique accounts. In 2019, we did further research to determine which tweets were still relevant and which needed to be added to the list.

Hashtags That Get the Most Likes

First, let’s take a look at the 30 best hashtags to get likes on a tweet:

Some of these hashtags might surprise you — #worldwaterday, for example, doesn’t have much in common with #tuesdaymotivation, and yet both made the list.

The most popular hashtags fit into a few categories:

Hopefully, the list is broad enough to help you easily incorporate one or two topics into your social media strategy — when it’s a holiday, for example, your business might do well posting Tweets relevant to that day, or if your engagement is low, you might consider creating a social media contest. 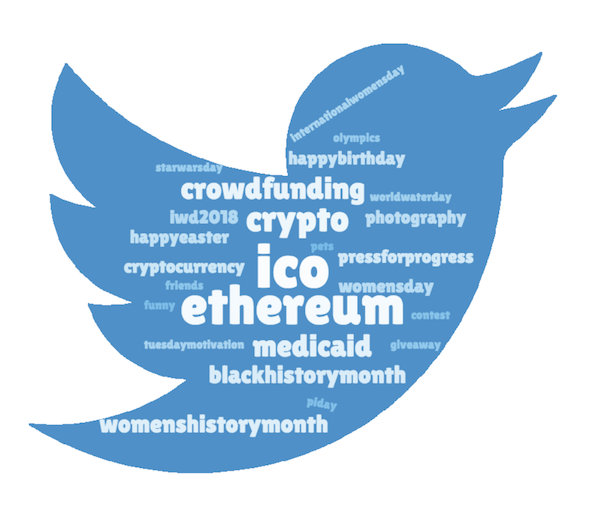 Some of the following hashtags overlap with our most-liked hashtags on Twitter, but others stand alone as popular for getting retweets but not necessarily for getting likes. Here’s a list of the 30 we found to be most retweeted:

There are a few possible explanations for these most retweeted hashtags. For instance, contest hashtags might rank high on the list as a result of contest creators asking for retweets instead of likes. This is probably a good strategy for smaller Twitter accounts looking to reach a new audience. However, a Twitter account with a lot of followers might see better results asking for likes, which could re-engage their existing audience.

If you’re interested in engaging more meaningfully with your Twitter audience, you might benefit from the hashtags in this list. These 29 hashtags are most likely to result in a direct reply on Twitter, ideally sparking a conversation between your business and potential customers.

The most-replied-to hashtags are similar to our previous lists, but there are a few differences:

Perhaps you might consider asking a question using one of these hashtags (“Favorite #movies?”) to increase replies from your audience. Twitter is meant to be a social platform — with these hashtags, you can hopefully elevate the conversations you’re having with your followers.

Here’s the list of the 34 highest-performing hashtags for that past two years:

Currently, hashtags related to technology, health, and lifestyle remain consistently popular. However, there were a few new additions:

Finally, a few other top hashtags that just missed the list include #predictiveanalytics, #databreach, #robotics, #machinelearning, and #augmentedreality.

We don’t expect you to create quality content by stuffing your tweets with #java #womenintech and #funny — instead, we hope you can incorporate some of these hashtags into thoughtful messages you believe makes sense for your business, to encourage increased engagement with your audience.